In the recent Fine Clock sale held in February 2022, star lot was this magnificent 'Giant' mantel clock of exhibition quality, selling for £30,336 (inclusive of fees) 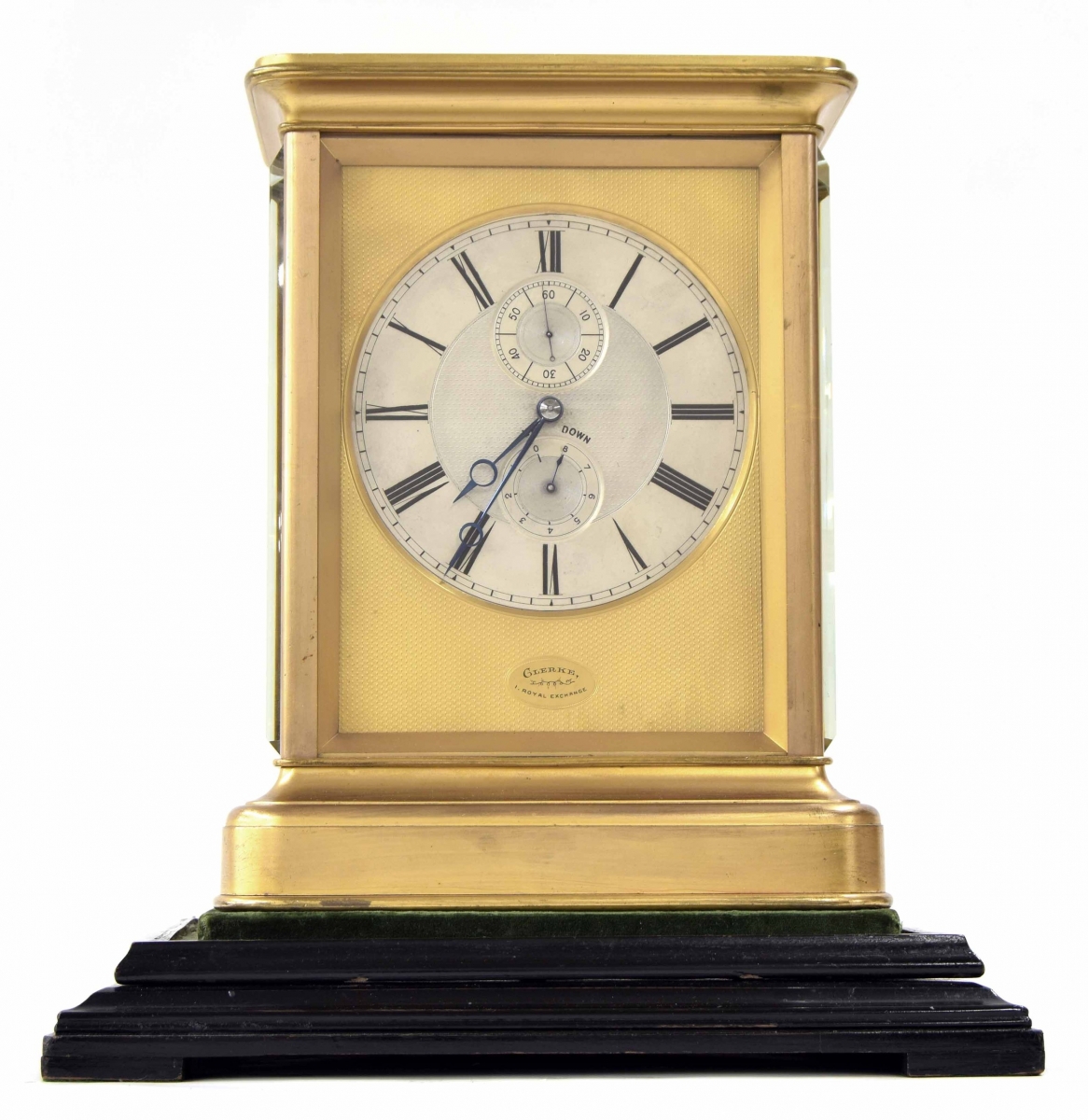 Exceptional gilt-brass giant mantel chronometer of exhibition quality with Kullberg's flat rim balance, the dial signed Clerke, 1 Royal Exchange within an oval cartouche to the bottom of the engine turned gilt mask, the 6" silvered chapter ring with painted Roman numerals and blued steel hands, the engine turned centre with subsidiary dials for seconds and up/down, six dial feet to the substantial movement secured by five gilt brass pillars with blued steel screws to the front and back plates, the rose-gilt large rectangular platform with blued steel helical spring high quality Earnshaw spring detent escapement with jewelled locking stone, the Kullberg Hybrid balance wheel with bimetallic flat rim, wedge shaped heat compensation weights and outer timing screws, the high quality wheel train with maintaining power to the massive chain fusee, polished steel arbours and pinions, the case with moulded base, heavy bevelled glasses to the sides and similarly glazed top, the rear door with securing latch to the base and bevelled glass set with hand-set and winding shutters in the style of Dent, the wheels secured to each arbour by three individual screws with a moulded ebonised turntable base, chronometer 12.25" high; with key


* Victor Kullberg was born in Sweden, apprenticed in 1840 and worked as journeyman to the famous Swedish watchmaker Urban Jurgensen in Copenhagen. He moved to London in 1851, initially making top quality escapements for other clockmakers, but he soon began to supply complete watches and chronometers. He had success at international exhibitions and in the International Time Trials, winning the Greenwich Time Trials on several occasions.
In 1864, Kullberg won his first Greenwich time trial with chronometer no. 760, which he had fitted for the first time with his famous 'flat rim' balance. Noted for its ability to compensate for temperature error, the flat rim balance with good looks. The Astronomer Royal, in his report to the Clockmakers Company on the subject of chronometer 4066 by Kullberg, which had again won first prize, said that 'this was the finest chronometer they had ever had on trial'.
A chronometer case and of this size, bears close resemblance to the giant examples by Frodsham and, in particular, the ultra-complicated enormous exhibition clock by M F Dent (for reference see Derek Roberts Carriage and Other Travelling Clock. Schiffer 1993, p318 fig 21-20) not only are the proportions of the mouldings similar but also the high quality brass shutters set into the thick lead glass rear door are similar to that of Dent.
An identical Clerke chronometer, probably this example, was featured in Clocks 'Number One' issue page 54, illustrated and featured selling at auction for £3,600 in 1977